At Blueprint, we utilize tactics based on the fundamentals of Trend Following, attempting to smooth the investment ride and to keep compounding high for our advisor clients.  We generally do this using passive instruments such as index-based ETFs and Mutual Funds for two reasons:

Outside of that, we typically stay out of the active versus passive discussion because it really misses the point.  As we note below, passive funds have generally outperformed active funds, but both are just tools, not strategies.  Both leave their holders susceptible to behavior bias and underperformance in the face of large downturns in the market.  In our estimation, the only remedy for this is a process acting as a shock absorber against bear markets.

That said, the parallels between active management and building a sports team are interesting and illustrative.  Being fans of basketball as well as BIG DATA, we love to examine the intersection of these topics, just as we do the financial markets.

With the NBA season beginning this week, we were interested to analyze just how successful league general managers tend to be at selecting the best players in the annual draft. Using the tremendous statistical resources of Basketball-Reference.com, we acquired the performance numbers for every draft pick since 1989, when the NBA’s draft setup came into its modern two-round form. Analyzing Win Shares, a statistical estimate of the number of wins a player contributed to his team over the course of his career, we determined whether each chosen player went on to be the most productive of all the players left available in the draft pool. For instance, when analyzing the 7th pick, we excluded the win shares of players chosen 1-6, as they were no longer eligible to be drafted. This is a rough approximation of whether the GM in charge of drafting correctly selected the best available player remaining. The results are paltry: in 28 years, the success rate is a meager 10.46%. The year-by-year and cumulative totals can be found below*: 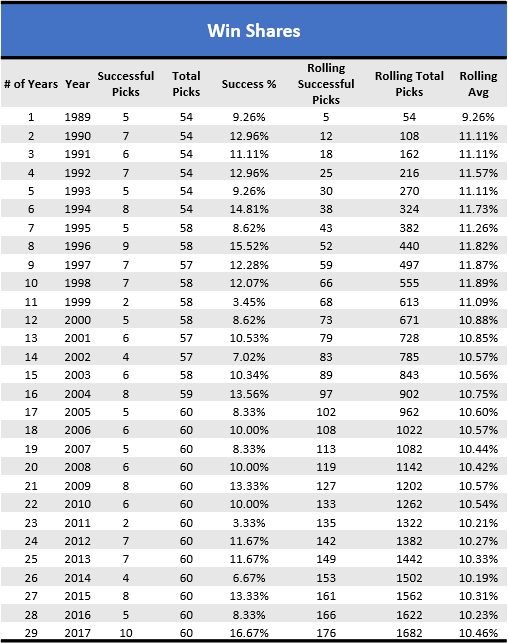 These numbers are somewhat skewed by the fact that many players in this sample are still active. For instance, at the conclusion of this past NBA season, two players selected in the 1998 Draft were active players: Dirk Nowitzki and Vince Carter. The closer to today the study moves, the less certain we are about the eventual final win shares totals of drafted players. Take the #1 overall pick from two seasons ago, Ben Simmons from Louisiana State University, who sat out his first year with a foot injury – Simmons acquired no win shares in his first season of eligibility but played so well last season that he won Rookie of the Year and still leads his draft class in Win Shares. Simmons may ultimately end his career as the best player in his draft class when it comes time for his retirement (though this is by no means a certainty; in this 29 year sample, only 7 number one picks currently lead their draft class in win shares: Shaquille O’Neal ’92, Tim Duncan ’97, Lebron James ’03, Dwight Howard ’04, Anthony Davis ’12 and Karl-Anthony Towns ’15, and Ben Simmons ’16, of which two are retired [O’Neal and Duncan]).

How do GMs fare if we use a different metric of player evaluation? After all, individual win shares are based on the actual number of wins his team acquires. Given that basketball requires five players per team on the court, it could be unfair to judge players individually based on team performance. Luckily, sabermetricians long ago developed Value Over Replacement Player (VORP), a statistical estimate of the net points contributed by a player above a minimum league replacement player contribution, adjusted for playing time. Using this metric, the success rate for GMs improves slightly to 11.18%. The year-by-year and cumulative totals can again be found below:

The inability of NBA General Managers to select the best players available in the annual draft mirrors the similar ineptitude of active fund managers in picking stocks. Routinely, active fund managers are outperformed by their passive benchmarks. The exact success rate is not settled, but none of the various numbers are impressive: according to Morningstar, the ten year success rate for U.S. Large Blend funds is 14.8%; according to the Financial Times, 17% of active funds meet or beat their passive benchmarks; according to NerdWallet, the figure is 24%. At least stock-pickers seem to be doing better than NBA general managers!

But wait- perhaps we aren’t comparing apples to apples. After all, we were analyzing whether GMs chose the best and only the best available player left, not whether their chosen players outperformed a benchmark. In order to determine one rough benchmark for the value of each selection, we ranked every player by win shares within their own draft class and compared the rankings to the pick slot. If a GM selected a player who went on to rank equal or higher in win shares than their pick slot, the GM would get credit for beating the slot “benchmark.” We found that of the 1,681 draft selections made between 1989 and 2017, 749 equal or exceed their slot benchmark, for a success rate of 44.56%. Good thing the stock pickers aren’t running your favorite team! 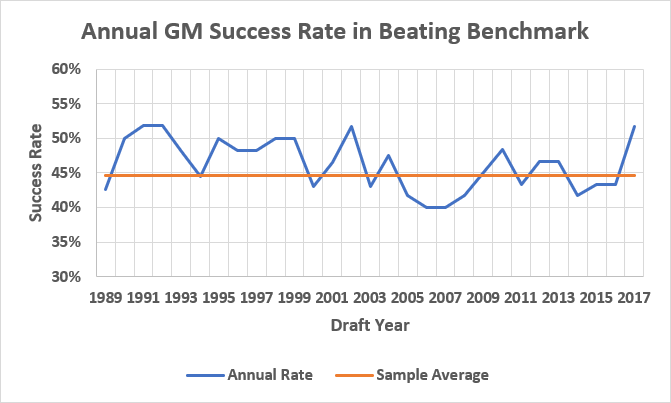 The chart above plots each year’s success rate versus the long-run average. This means that if a team owner could choose an “Index GM” with a success rate of 45% or better then over many years they would likely outperform the typical “active GM.” Moreover, it would be ideal if they could employ a process that leverages the index for better, more stable performance. Unfortunately, owners can’t (yet) do this, but investors can. At Blueprint, we utilize low cost, passive index funds as our main strategy tools due to their efficiency and ability to consistently deliver the exposure and characteristics we desire.

In our next post in this series, we will further examine other possible benchmarks for general managers making NBA draft selections.

*Those players selected who did not play a single game in the NBA had Win Shares and VORP counted as 0 for ranking purposes, but were discounted when giving GMs credit for successful picks, as the point of drafting a player is for them to actually play.

This blog is for informational purposes only and does not constitute investment advice or a recommendation of any particular security, strategy, or investment product. The expressed views and opinions presented are for informational purposes only, are based on current market conditions, and are subject to change without notice. Although information and statistics contained herein have been obtained from sources believed to be reliable and are accurate to the best of our knowledge, Blueprint Investment Partners cannot and does not guarantee the accuracy, validity, timeliness, or completeness of such information and statistics made available to you for any particular purpose. Past performance is not indicative of future results.